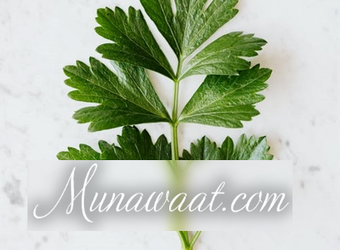 Parsley in Arabiccolloquial dialects: BAQDONES or Maadones. Gender: Vegetarian belongs to the family of Petroselinum. This genus includes one acceptable variety, which is crunchy parsley (common), and other varieties.

The benefits of parsley
Parsley is a true health source. Recent research shows that parsley is one of the top three medicinal herbs (along with garlic and nettle). Despite all this, few people eat parsley alone, whoever does this often uses parsley to refresh the mouth, especially after eating a heavy meal or garlic. In addition to other benefits that include:

Good for digestion and liver
Eating parsley daily contributes to supporting digestive health due to its role in supporting the liver.
It increases levels of the antioxidant glutathione in the liver and also supports other antioxidant enzymes.
It has been shown that parsley can regenerate liver tissue after damage from chronic diseases.
Parsley stimulates the production of bile in the liver, which is necessary for the digestion of the fat in the intestine. The lack of bile production contributes to poor digestion, bacterial growth, and hormonal disturbances.
Bile production is also necessary to flush out toxins that will be flushed out of the body and liver.
It reduces blood sugar.
Parsley has been shown to lower blood sugar levels in various studies.
It is being used as an alternative treatment for type 1 diabetes in some countries.
Improves breath odor
Parsley is rich in chlorophyll, which gives the body a pleasant smell and is considered a breath freshener.
Chlorophyll acts as an anti-mutagen and reduces odor-causing bacteria responsible for producing bad breath and body odor. 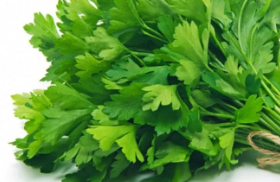 It reduces blood pressure.
Parsley is also known to act as a diuretic and reduce blood pressure. It increases the excretion of sodium and water through the urine; it increases the reabsorption of potassium in the kidneys. This is especially helpful for anyone with poor circulation, swelling, cellulite, and other cardiovascular problems.
Fights cancer
Fresh parsley leaves contain antioxidants, including flavonoids, carotenoids, ascorbic acid (vitamin C), and tocopherols. These components protect the body from free radicals.

Treat many diseases
Boiled Parsley protects from a wide range of diseases such as atherosclerosis, diabetes, colon cancer, and asthma.
Parsley is an excellent source of Vitamin C that works to eliminate free radicals that cause these diseases.

Protect blood vessels
Boiled Parsley contains vitamin B and folic acid, which reduce homocysteine.
Parsley in ancient medicine
Parsley in the Macedonian language is called Matt. The Egyptologist (Grabo) found the remains of the seeds and leaves of this plant in some Pharaonic cemeteries. He made sure that parsley is used in many recipes that are written in the Macedonian language.
Parsley has been used for hundreds of years, as the Pharaohs used fresh parsley as a food that reduces fever and in cases of dysmenorrhea or menopause in the form of sprays to remove infections and tumors, while they used parsley seeds to remove intestinal gases and dysuria.
The ancients used it as a treatment for stomach infections, as a solvent for kidney stones, a good laxative for the abdomen, anti-colic, anti-asthma, shortness of breath, breast tumors, relieves mouth odor, menstruation, useful for problems of the spleen and liver as well as milk secretion. Fresh leaves are used, such as spinach, against breast swelling, insect bites, lice, and skin infections.

Respiratory system treatment
Parsley is useful in asthma and respiratory disorders, and parsley juice treats bronchitis by boiling the parsley in water for 10 minutes and then drinking it several times during the day to purify and cleanse the respiratory system.

Parsley as a treat
Useful treatment for menstrual problems, urinary tract infections and infections, digestive disorders and bladder, kidney disorders and inflammations, menstrual disorders, digestive disorders, stomach pain, intestinal worms, scurvy.
Parsley and cosmetic
To remove spots and pimples from the face, wash the face with parsley juice or soak it twice a day.
To get a clear color on the face, wash it in the morning and evening for a week, boil about three tablespoons in half a liter of water for 15 minutes, and use lukewarm water.

Caveats
Parsley should not be used as a treatment for pregnant women or those planning to become pregnant, for children under the age of two years, and for people who suffer from chronic diseases of the digestive system such as ulcers, colitis, and intestinal inflammation.

It is a plant that follows the pineapple genus of the bromelium family. Pineapples are a tropical fruit that only …