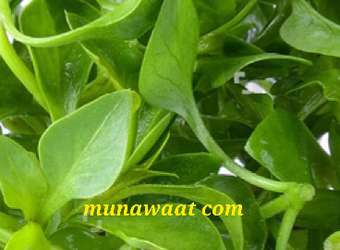 Watercressis grown from leafy vegetables, such as lettuce, and is an annual herb that grows in moist soil and on the edges of canals and streams. It is eaten raw and used in salad dishes and is not usually cooked. It is widely cultivated in all Gulf countries and the Arab world. There are many types of it, such as green cress, winter cress, bitter rash, Indian watercress, rocky watercress, and dry watercress.

It must be picked before the pink buds appear. It is rich in vitamins, especially vitamin C and minerals.
Watercress is one of the most popular leafy, and it stimulates testosterone.

Benefits of watercress
Watercress contains many essential minerals, vitamins, and antioxidants. Watercress is rich in iron, folic acid, iodine, phosphorous, calcium, and vitamins A, C, and E; it is one of the most powerful antioxidants.

Watercress fights aging signs.
Recent research has proven the role of watercress in combating aging and preventing skin cancer; it is used as a treatment for eczema and various skin infections. Watercress maintains healthy skin and healthy hair as well, and its iodine content is important for the thyroid.

Fight cancer Dark green vegetables, such as watercress, broccoli, and cauliflower contain:-
Powerful antioxidants (Vitamins K, C, A) that fight free radicals.
Phytochemicals that degrade to produce isothiocyanate, which studies have proven its effectiveness as anti-cancer.
Many types of research have proven the role of watercress in fighting cancer, especially breast, lung, colon, rectal, and prostate cancer; it is also effective in reducing the risk of leukemia and kidney cancer.

Treating infections
Watercress can also be a treatment for upper respiratory tract infections; it is famous food rich in iron that can protect from anemia.

Good for diabetics
One of the benefits of watercress is that it contains a high amount of dietary fiber, so it is ideal for the following:
Reducing harmful cholesterol levels in the blood.
Controlling and regulating high blood sugar levels by reducing sugar absorption in the intestine.

Enhance heart health
The richness of watercress in potassium makes it have a role in controlling and reducing blood pressure. Potassium is known to be an ingredient that helps to relax blood vessels and maintain fluid balance in the body.
Watercress also plays a role in preventing arteriosclerosis because it contains copious amounts of lutein.

Maintaining healthy eyes
Watercress contains high amounts of vitamin A and beta-carotene (a powerful antioxidant), in addition to lutein and zeaxanthin, which makes it play a major role in:
Reduced chances of developing macular degeneration, which older adults often experience.

Watercress benefits for hair
Strengthen hair follicles and protect them from damage.
Nourishes hair, prevents hair loss, and helps it grow.
It also moisturizes the hair and makes it shiny and strong.

Watercress benefits for the skin
Moisturizes and nourishes the skin.
Lightens skin and prevents acne and pimples.
It works to protect the skin and signs of aging.
It helps get rid of freckles, dark brown spots, and acne scars on the skin due to the high folic acid.
It has the ability to treat Vitiligo.
It protects from dark circles because it is rich in vitamin K, which has whitening properties.

Watercress benefits for the diet
Watercress contains many nutritional compounds that are useful in diet and weight loss, and among the benefits of watercress for the diet are the following:
Helps to lose weight naturally because it is rich in minerals, antioxidants, and fiber that promotes feelings of satiety for a long time.
Watercress contains low calories that do not cause weight gain and vitamins that contribute to burning fats accumulated in the body.
It reduces cholesterol and blood sugar, thus avoiding any weight gain.

Watercress benefits for nerves
Relieves nervous anxiety and treats it.
Calms and strengthens the nerves because it contains a high proportion of magnesium and calcium, in addition to vitamins (B) and vitamin (E).
It contains a vitamin B complex, which strengthens the nerves and keeps them healthy.
The body is relieved of anxiety and tension.
The body maintains the health of the nervous system and makes it strong.
It contains high levels of potassium, which is very beneficial for brain and nervous system health.
It relieves the disruptions and anxiety that many people experience when sleeping.
It improves the functions of the nervous system due to vitamin B content.

The benefits of watercress for women: claim or scientifically valid benefits?
The Mediterranean region Inhabitat of watercress. Watercress is cancer-fighting; it is rich in fiber and phytochemicals and is characterized by low amounts of sugar, calories, carbohydrates, and fats. As we mentioned earlier, it is rich in many vital nutrients, such as folic acid, which contributes to the formation of DNA and other genetic materials. The amount of folic acid in 100 grams of watercress leaves is 97 micrograms, and it should be noted here that watercress is an annual plant that grows up to 20-100 cm.

Protection from breast cancer
Several studies have shown the results that eating cruciferous vegetables, including watercress, contributes to reducing the risk of developing various types of cancer, and this function is attributed to isothiocyanates, including sulforaphane and erosene in its composition, as sulforaphane is metabolically and synthetically linked significantly to watercress. However, watercress contributes to preventing breast cancer by preventing the proliferation of breast cancer cells, as well as stopping the cell cycle when dividing and the process of programmed cell death, which confirms the benefit of watercress

Dandelion
Many people believe that the health benefits of dandelion grass (also known as fog and dandelion) are not many, except that it contains more protein than spinach, as its leaves are rich in calcium, iron, magnesium, phosphorous, potassium, manganese, and vitamins A, C, E), (K. B), (b1), (b2) and (b6). Its roots also contain calcium, iron, potassium, sulfur, silicon, magnesium, phosphorous, and chlorophyll.

The amazing health benefits of dandelion are:
It strengthens the bones.
Dandelion is rich in calcium, which is essential for the growth and strengthening of bones. It is also rich in antioxidants such as vitamin C, which protect the bones from damage caused by aging. This unavoidable damage is the result of free radicals and is represented in osteoporosis and weakness.

Treating liver disorders
Dandelion can treat the liver in several ways. The antibiotics prevent the liver from aging, while the other ingredients treat liver bleeding. Dandelion stimulates the liver and improves digestion. Proper digestion reduces the possibility of obstructions, which reduces the incidence of gastrointestinal diseases.

Fights diabetes
Dandelion juice helps diabetics by stimulating the production of insulin by the pancreas, which contributes to maintaining a low level of blood sugar. Dandelion improves urine flow, which helps diabetics eliminate excess sugar from the body. Diabetics are also prone to kidney problems, and since dandelion promotes urine flow, it helps get rid of stored sugar that is concentrated in the kidneys.

Treating urination disorders
Dandelion is a natural diuretic, and it is called "picenlate" in France, meaning to urinate in bed! This helps get rid of toxic waste products in the kidneys and urinary tract. Dandelion also prevents the growth of bacteria in the urinary tract.

It is good for the skin.
Dandelion milk is used to treat skin conditions caused by bacterial and fungal infections. Be careful not to touch the eye contour.

Weight-loss
Urine is made up of 4% fat, so the more we urinate, the more toxins and water we get from the body. Additionally, dandelion is as low in calories as green plants.

Fights cancer
Dandelion is rich in antioxidants that reduce free radicals in the body and reduce the risk of developing cancerous diseases. Dandelion purifies the body and protects it from the development of tumors and various types of cancer. 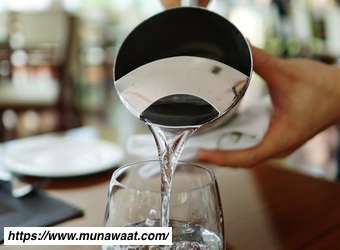 Benefits of Water for Body, Skin, and Weight Loss

Water is essential for a healthy life. In every cell, tissue, and organ, our body contains water. Whether your body …