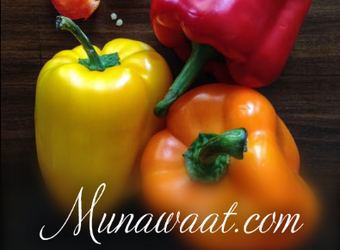 A botanical genus of the Solanaceae family.

Its Inhabitat is the Americas and is now grown all over the world. Some types of capsicum are used as a spice, vegetable, and medicinal compress. Capsicum has many names depending on the type and location. The hot type is commonly called chili or hot pepper. Large and medium peppers are called red peppers, green peppers, or sweet peppers in North America and the United Kingdom. In New Zealand, Australia, Singapore, and India, they are called capsicum. In some parts of the world, it is called paprika (the name paprika is also used for a spice prepared by grinding several types of dried peppers). The generic name is derived from the Greek word kapto, which means "nibble" or "to swallow". The word "capsicum" came into use due to its similar flavor to black pepper. Although there is no botanical relationship with this plant or with Sichuan pepper, the original name was established by the Nholti people (Mexico) with the term Chilean or Xilian, referring to the enormous species of capsicum crops from around 3000 BC, as evidence of the Traces of pottery found in Puebla and Oaxaca.

Nutrition facts
Sweet peppers, raw or cooked, are consist of 92% water, contain carbohydrates in the form of the sugars glucose and fructose, and are attributed to the sweet taste of paprika, and paprika is an excellent source of dietary fiber.
Here is a list of the vitamins and minerals that paprika contains:
Vitamin C
One sweet pepper contains 169% of the RDA for Vitamin C! This makes paprika one of the best natural sources of vitamin C ever.
Vitamin B6
This vitamin specifically boosts red blood cell production.
Vitamin K1
It is an important vitamin for blood clotting and bone health.
Potassium
It is one of the minerals that are important to heart health.
Folic acid
Vitamin B6 has many benefits, especially during pregnancy.
Vitamin C.
It is one of the important antioxidants for nerve and muscle health.
Vitamin A
Bell peppers are a good source of beta-carotene, which is converted in the body into vitamin A.

The health benefits of paprika
Strengthening the immune system
The immune system protects the body from infections and diseases in general, and vitamin C, in particular, contributes to strengthening the immune system and enhancing its ability to perform its functions in the body efficiently.
Protection from anemia
Iron deficiency is one of the main causes of anemia, and a common symptom of anemia is a general feeling of fatigue and weakness.
Not only is paprika a good source of iron, but it is especially rich in Vitamin C, which increases and enhances iron absorption in the intestine.
The efficiency of iron absorption in the body increases when we eat fruits and vegetables rich in vitamin C.
Therefore, eating raw paprika with iron-rich foods, such as meat and spinach, may help boost iron stores in the body, which reduces the chances of developing anemia.
Enhance eyes
The most common types of eye problems are those caused by aging and infections, such as macular degeneration and cataracts but poor nutrition may also play a role in these diseases.
Sweet bell peppers are high in minerals, vitamins, and antioxidants that will boost and protect eye health if consumed regularly and in good amounts daily.

Feeding the fetus during pregnancy
It is no secret to anyone that eating adequate amounts of folic acid is essential for the health of a pregnant woman and the fetus. A pregnant woman can get good amounts of all the nutrients and folic acid she needs during this important period from paprika.

Perfect for losing weight
The carbohydrates in bell peppers are often converted into energy quickly and not stored, which helps maintain body fitness or even helps fight excess pounds, and fight obesity.

Promote digestive health
Digestive disorders may cause diarrhea, nausea, vomiting, and other digestive problems, so nutritionists advise eating paprika regularly every day due to its high niacin content, which is important for digestive health.
Promote a healthy nervous system
The nervous system sends important and necessary signals to the brain so that this, in turn, sends the necessary commands for the efficient functioning of all organs and parts of the body.

Maintain healthy skin and improve its appearance
Eating abundant and regular sources of vitamin C not only guarantees the health of the immune system, but it also helps in improving the appearance of the skin dramatically, and this applies to capsicum. The benefits of paprika for the skin are not limited to the fact that it contains vitamin C, but also its high content of beta-carotene makes it important for human health.
Eating paprika regularly also helps increase collagen production in the body, which is very important for the skin.
Vitamin C reduces dry skin and wrinkles and reduces the chances of cancer.
The potential harm from eating too much pepper
Eating chili peppers may cause an allergic reaction in the mouth due to the high temperature of capsaicin, which can destroy the taste of the papillae, and hands should be washed well after touching hot peppers, and it is preferable to wash them with vinegar.
Avoid eating chili peppers because excessive capsaicin stimulates the secretion of the intestinal mucosa. This causes stomach and intestinal pain and may cause diarrhea, irritation, and bleeding in the case of hemorrhoids.
It is preferable not to eat chili peppers for people suffering from respiratory problems such as asthma and bronchitis. It may cause spasms in the airways.
Description of colored pepper
Colorful peppers belong to the family of chili peppers, eggplant, and many other vegetables. 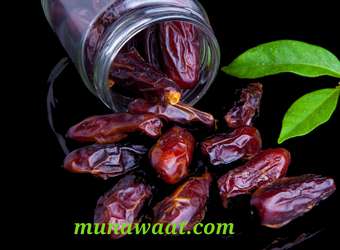 Dates are the fruit of palm trees, one of the famous fruits for their high nutritional value, and they are …