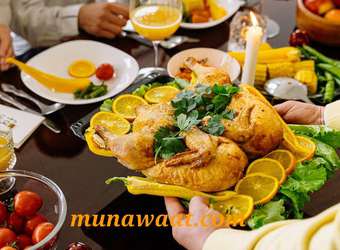 How to prepare
1-Boil the chicken first and put on it (cardamom, Lumi, bay leaf, onion, garlic, and cloves)
2-Put the oil on the fire and add the onion and stir it a little.
3-Add the carrots and hot pepper.
4-Add garlic, cumin, mixed spices, salt, and black pepper.
5-Add rice and stir it well.
6-Add the chicken broth to rice and stir it well and leave it until it is cooked.
7-Put a small piece of tin and put it inside burning charcoal and on top of rice.
8-Put a little oil on it so that the rice smokes and covers it
9-Paint the boiled chicken with (a spoon of tomato paste, turmeric, oil, salt, black pepper)and put it in the oven.
10-when chicken becomes red, we put inside the oven a piece of burning coals.
11-Put a little oil on charcoal and close the oven until the chicken smokes.
12- Put raisins and almonds on the chicken.

Chicken Zarb in the oven

How to prepare
1-Boil water and add bay leaf, cinnamon sticks, cardamom, cloves, black pepper, and Lumi.
2-Put tomato paste, turmeric, ginger, cardamom, smoked paprika, black pepper, and oil and mix them together.
3-Add potatoes, carrots, and chicken and spice them well.
4-Put the soaked rice in a tray and put the broth on top of it.
5-Put the chicken, potatoes, and carrots and cover them with foil.
6-Put them in the oven at a temperature of 200 degrees for an hour and a half.
7- Put burning coals in a piece of foil and put oil on it in the oven.

How to prepare
Put the shredded chicken, add black pepper, paprika, salt, and mixed chicken spices, and mix with each other.
Then in a saucepan, we put the oil, garlic, onion slices, chopped potatoes, chopped peppers, salt, and tomato slices, and put the chicken on top of them. Put them on a low fire for half an hour, then put the boiled rice. Put the chicken and vegetables; press the rice a little, then add the saffron soaked in rose water on the top of the rice and leave it on low fire for a quarter of an hour until cooked.

How to prepare
Season the potatoes with chicken, garlic, lemon, oil, spices, salt, and black pepper. Then we leave them on the side, then fry the onion and hot pepper in oil, put salt and black pepper, then add the tomatoes, spices, and chicken spices, then put them in the tray and put the chicken and potatoes and cover it with tin and put it in the oven after an hour we uncover it and brush the chicken with broth until it takes on the color.

How to prepare
Cut the onion into slices, grate the ginger, mash the garlic, and cut the chicken into cubes, then put coriander, cumin, salt, and starch and mix them, then add onions, ginger, and garlic, mix them, then put it on the previously heated oil and stir until the chicken is cooked (Gravy) Put vinegar, soy sauce, sauce, lemon juice, sugar, salt, and white pepper. Then we put the garlic, ginger, and onions in the same pan in which we fried the chicken, then put the broth and leave them until they boil, then add the starch mixture and add the rest of the broth, then put the chicken on top and leave them on the fire for only ten minutes on low heat.

How to prepare
Cut the chicken into slices and put it on the side, then cut the onion into small pieces and put it over the olive oil for frying. We leave them on the stove until the onions wilt and cook, then add the spices, sumac, salt, cumin, and chicken and stir them until they absorb the flavor, then add the pine nuts, then put them on the bread from the wide side, roll it and put it in the tray, then brush the musakhan grains with olive oil and put it in the oven for 10 minutes.

Cut the chicken into slices, then mix it with spices, garlic, and olive oil, mix it, then put the chicken on the stove until it dries up and then put Onions, peppers, spices, and soy sauce on top and leave them until cooked. Then we put on the garlic bread, then the chicken and cheese, roll the bread, and put it on the grill (The garlic is a cup of milk, three tablespoons of flour, three tablespoons of mayonnaise, two crushed garlic tablets, one lemon juice and a teaspoon of salt and mix by hand). 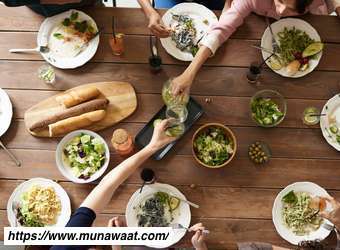 Are you unaware of what a healthy dinner is? Or do you not know the benefits of early eating dinner? …