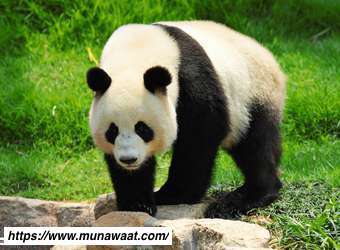 What is The Panda Animal?

Pandas are considered one of the best and emotional pets, as they are distinguished by their black and white color and fur that protects them from the cold, as well as dark circles around their ears and eyes.

Pandas live in their original habitat in the temperate forests of southwestern China.
The panda depends mainly on bamboo as food, as it eats about 84 pounds of bamboo per day.

A panda is a giant bear, but it differs from them with eyes that are different from ordinary bears.
The panda spends most of its day eating, and as its cubs are brave and protective, pandas eat things other than bamboo, but they depend on bamboo as their main and favorite food.

Another fact about this giant panda is that it cannot live in forests and wildlife without human protection.

The panda has become endangered due to over-hunting and deforestation and natural reserves since the 1980s.

This led to the depletion of the food resources on which the panda lives, the most important of which is bamboo.

The panda gives birth to one or two cubs every year or spring, and the cubs remain with their mothers under their care until 18 months have passed from their mother until they grow up.

Panda cubs when they are born, come blind and do not see until after six to eight weeks since birth, and their length is about 15 cm and they are very small.

Pandas are omnivores, characterized by a stomach capable of eating up to 12 kilograms of bamboo per day.

"Black and White Cat's Foot" is the meaning of the scientific term for panda "Ailuropoda melanoleuca".

In addition to bamboo, pandas eat other foods, including meat, small animals, and fish, but bamboo makes up 99% of their complete food.

Pandas are solitary animals, but they often gather for breeding in some seasons, and they can communicate with each other through smell.

Unfortunately, these beautiful animals are threatened with extinction, and it is estimated that only about a thousand pandas exist in the wild.

Pandas cannot adapt to cities or countries, and the reason for this is their digestive system. Their preferred food is bamboo. Because their size is large and the nutritional value in bamboo is low, they seek to eat a large amount of bamboo per day, about 20 to 40 pounds per day, and therefore pandas cannot Coexistence in public places, as their habitat is in habitats and in forests.

Because of over-hunting, some people hunt pandas and sell them in the market due to its high cost and price, where panda hunting brings them huge sums and this is one of the reasons that threatened the panda with extinction from China.

There are many reasons that led to the panda’s threat of extinction, the most important of which is the removal of reserves and natural forests and the over-hunting of pandas. The panda is distinguished from other bears by being one of the huge bears that do not roar and eat bamboo as the main food. 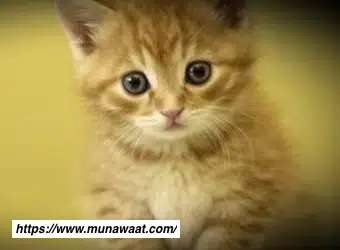 Cats are the animals closest to humans by being pet, cute and innocent, as they have several characteristics, including: