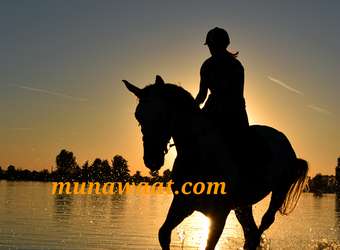 The horse is a symbol of power and authority; the ancient man associated with the horse and greatly appreciated this being.
No matter how advanced the technology is, the person still needs horses in many of his worksites and seeks loyalty to his sincerity and sacrifices.

Human-horse relationship:
It is an inevitable partnership, as it provided the human being with mobility to distant places, and it was a means of waging wars against the enemies. Horses also contributed to the spread of peace and stability, as they were used as a means of transportation and trade exchange.

The first horses provided our ancient ancestors with food, clothing, and shelter. Today we are in the 21st century, horses still provide these needs in remote, developing regions of the world.

The horses were called many names, including (man of war or fire) and, people used to give these names to strong horses. Also, owners of horses avoid naming them with the name of family members because they care about pedigree, so it would not be pleasant to call the horse by name of brother or mother. Often the names of the horses are strange, and some of them are funny.

Types of horses in the world

There are more than 400 breeds of horses around the world, which differ from each other in terms of origin, size, speed, beauty, colors, and also their uses. Some of them are vulnerable to extinction, and other modern breeds.

Among the types of horses are the following:
1- Arabian horses:
It is one of the best horse breeds for its endurance because of its strong body, energy, speed, and small size, and intelligence.
It enjoys its company with its owner; due to its desert origin, it can remain without food for a longer period than other horses.

2- Al-Aseel horses:
They are the most famous breed of horse, which are used in racing, and it is one of the warm-blooded ones, it is known for its energy and speed.

3- Gypsy horses:
Its inhabitant is Italy and Ireland, and it is precious because it is rare and has many qualities and advantages. It is very nice, beautiful, and docile and was used to pull caravans from region to region; it is of a strong physical structure. It is medium in size and has different colors and spotted; its hair is wrapped around its ends.

4- Andalusian horses:
They are called pure Spanish horses and originated on the Iberian peninsula. It is one of the purest endangered species, its numbers are few, it is distinguished by its strength, and it was used in the past in wars, and it lives about 25 years; its life can live more than that.

They are rare herbivores in grasslands and plains, and they live in a group on both sides of the Altai highlands in Mongolia. The wild horses in Mongolia are considered the only surviving wild horses. They can survive for a long time without water and only feed plants.
It has been crossed with a domesticated horse in some parts of the world, and both the wolf and the man are his enemies.

Sometimes the horse may live 30 years. During the breeding season, the female gives birth after a pregnancy period between 11 to 12 months. This horse has a reddish-brown coat, pale at the shoulders, and becomes paler in the lower parts. It has a dark brown mane erecting to the top and has strong legs and large hooves.
There are many types of wild horses that differ in color, weight, height, build, and tail; but they are all beautiful.

The way of wild horseslife: The leader in the flock is alone because he protects the flock and the females.

The leader is the experienced female; this female searches for new pastures and gives the order of control. She obeys the leader, and the rest of the horses obey her. Young males live in the herd for 3 years, after which they are expelled by the leader.

They create separate groups and live like this until they get other females, and then every one of them creates his own flock. Smells have a big role in horses life; the leader leaves his smell on the female so that no one else will approach them due to the scent.
Mothers get to know their colts and foals, and these also have a good relationship with the rest of the females and males in the herd.

We wish you an enjoyable reading

They feed on plants and usually feed on hay and grains such as barley and oats, which gives a high nutritional value for horses, foals, and colts.

The ground food is served for old horses because of their weak teeth. Oatmeal is also served with chopped straw for horses with digestive problems and horses that need a lot of food.

Horses breeding:
Horses are a mammal, so they give birth, and the female horse is called the mare.

Her pregnancy lasts between 320 to 370 days, and she often gives birth to one and rarely gives birth twin, as her little one is called by the name of the colt if it is a male and the foal if it is a female.

They usually give birth in the spring; the mare weans their young when they are four to six months old. Foals or colts will be able to stand and run after a short period of birth.

Horses are considered mature when they reach four months of age, but they continue to grow until six months. They are different in shapes and characteristics according to their types and can breed at 18 months of age. Usually, domesticated horses are not allowed to breed before the age of three, especially females.

I hope that you like the information in this article.

Horses are among the most beautiful creatures on earth; they have a close relationship with humans for thousands of years. Horses have become a symbol of nobility and equestrianism, as they carry beautiful qualities, so let's get to know some of them:

1- Vision:
Horses have a good view to some extent due to their large eyes, their diameter is 25 x cm, which makes them nine times larger than the human eye, and the horse has three eyelids, two normal and the third is a membrane located in the inner corner of the eye, which cleans his eye constantly, horses sees distant objects quite well.

2- laughing:
The horse has been seen often with a strange expression, such as, it moves jaw left and right, which resembles laughter. In reality, it enhances its sense of smell with this movement so that it directs smells to the scent glands and recognizes what is good or bad from them. This characteristic is spread among males more than females.

3- Horses don't forget insult:
Scientists have discovered that horses understand human language, so if their owner mocks them in front of his friends, they understand that, and they may not forget that throughout their life.
Scientists have proven that a horse's memory is as good as the memory of an elephant. When a horse deals with you kindly, know that you will remain in its memory as a friend forever, as they have the ability to remember faraway places.

4- Anger and Happiness:
The horse can be noticed when its ears are turned back, indicating anger and the danger of approaching it. If the horse gives its back, this means his intention to kick the person next to him. Behaving in the usual way, which is normal for the owner or trainer, indicates that the horse is in good condition and that horse is satisfied.

We have provided you with some information about the characteristics of horses, which are known for their beauty, nobility, equestrian, and strength.

How to take care of a cat?

Having a cat is a very nice thing, and what is the important thing for that, you should have a …

(Human and horse)type of horse